Actors Tom Selleck, Bridget Moynahan, Donnie Wahlberg and Will Estes arrive at the 2010 CBS Up Front at Lincoln Center in New York City on May 19, 2010.. UPI/John Angelillo | License Photo

Selleck plays the commissioner of the New York Police Department on the show while Wahlberg plays his son, an NYPD detective.

"My mother was a huge 'Magnum, P.I.' fan and she's in heaven right now," Wahlberg told reporters in a recent telephone conference call. "She's watching the show and I could call her at 4 in the morning to get her take on the show and she'll get right up and go, 'Oh, my God. I loved when you made Tom laugh!' She's in her glory. And, of course, I remember 'Magnum' and stuff. 'Three Men and a Baby' was one of my favorite movies."

In addition to admiring his work, Wahlberg said he also has tremendous regard for the way Selleck has maintained his decades-long career.

"I've seen him do different interviews and do different things and I've gained a lot of respect for him over the years and never more than I have for him now," the New Kids on the Block singer said. "To see how far he's come and the level of success he's had and to see the grace he shows every day on set, it's something one can only aspire to. … That's the kind of life I try to live."

Asked what his relationship with the police was like when he was a kid, Wahlberg joked, "When I was in Boston growing up, I pretty much knew all cops in my neighborhood because they had arrested my brothers."

"I had seen (the police around.) They knew me and I knew them," added Wahlberg, who was one of nine siblings, including bad boy-turned-celebrated-actor-producer Mark Wahlberg. "We knew a lot of cops anyway. When you grow up in a city like Boston, a lot of kids become criminals or cops. I never really had a bad take on cops other than I hate when there's one behind me on the highway. I generally feel like I just robbed a bank even though I did nothing (wrong.)"

He went on to say his respect for people who work in law-enforcement has only grown through the years, noting, "99 out of 100 guys and women are out there trying to do the very best they can in very scary, very dangerous circumstances."

TV // 15 hours ago
Ringo Starr says he is 'amazed' that every generation gets into Beatles music
Sept. 24 (UPI) -- Ringo Starr discussed newer generations becoming fans of the Beatles and the upcoming "Get Back" documentary while appearing on "Jimmy Kimmel Live." 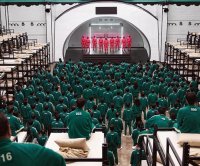