Bob Dylan (L), pictured with president Barack Obama, will perform across the United States on his "Rough and Rowdy Ways" tour in 2022. File Photo by Kevin Dietsch/UPI | License Photo

The 80-year-old singer and musician said Monday that he will launch his Rough and Rowdy Ways tour in March.

The U.S. portion of the tour kicks off March 3 in Phoenix, Ariz., and comes to a close April 14 in Oklahoma City, Okla.

According to the announcement, Dylan plans to keep touring through 2024.

Dylan released his 39th studio album, Rough and Rowdy Ways, in June 2020. The album features the singles "Murder Most Foul," "I Contain Multitudes" and "False Prophet."

Here's the full list of dates for the U.S. portion of the tour:

April 7 - Mobile, Ala., at Saenger Theatre 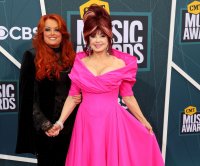 Music // 4 days ago
CL takes over ranch in 'Chuck' music video
May 13 (UPI) -- K-pop star CL released a video for "Chuck," a song from her debut studio album, "Alpha."
Advertisement