Jack Harlow will be traveling to California to perform eight different shows throughout the state. File Photo by John Angelillo/UPI | License Photo

Dec. 9 (UPI) -- Jack Harlow has announced an eight-city California tour that will begin in January.

The Crème de la Créme California tour will begin Jan. 7 at The Novo in Los Angeles before it concludes Jan. 16 at Ace of Spades in Sacramento.

Tickets go on sale for the general public starting Friday at 10 a.m. PST.

The California stint comes after Harlow will perform at five different venues throughout his home state of Kentucky in December. The sold out Kentucky shows include a stop at the Palace Theatre in Louisville.

Harlow will also be ending the year with shows at the Coca-Cola Roxy in Atlanta on Dec. 28 and at Terminal 5 in New York City on Dec. 30. Both shows are sold out.

Harlow released his debut album That's What They All Say in December 2020. He also appears on Lil Nas X's "Industry Baby," which nominated for Best Melodic Rap Performance at the 64th annual Grammy Awards.

Olivia Rodrigo, over 40 artists make RIAA's Gold & Platinum Class of 2021 Lil Nas X breaks out of prison in 'Industry Baby' music video What to watch next: Sign up for UPI's Streaming newsletter

Music // 2 days ago
'Encanto' soundtrack tops U.S. album chart
Jan. 15 (UPI) -- The soundtrack to the animated movie "Encanto" is the No. 1 album in the United States. 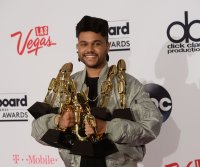 Music // 6 days ago
The Weeknd fights his older self in 'Gasoline' music video
Jan. 11 (UPI) -- The Weeknd released a music video for "Gasoline," a song from his new album "Dawn FM."
Advertisement