U2 releases new 'Sing 2' track 'Your Song Saved My Life'

U2 and frontman Bono perform in concert in July 2017. The band has released their first new song in three years. File Photo by David Silpa/UPI | License Photo

Nov. 4 (UPI) -- U2 has released a new song titled "Your Song Saved My Life," which appears on the soundtrack for upcoming animated film Sing 2.

The band uploaded the track to YouTube on Thursday. "Your Song Saved My Life" can also be streamed through Spotify, Apple Music, Amazon Music, Pandora and Deezer.

"You know your song saved my life/ I don't sing it, just so I can get by/ Won't you hear me when I tell you, darlin'/ I sing it to survive," frontman Bono sings during the chorus.

U2 last released the album Songs of Experience in December 2017.

Bono lends his voice to Sing 2 and portrays reclusive rock legend Clay Calloway. The film is centered around Buster Moon (Matthew McConaughey) and his friends needing to convince Clay to perform onstage again for a big concert.

The Sing 2 soundtrack will also feature three covers of U2 songs "I Still Haven't Found What I'm Looking For" by Bono and Johansson, "Where the Streets Have No Name" by Kelly, Egerton, Johansson, Witherspoon and Kroll and "Stuck in a Moment You Can't Get Out Of" by Johansson.

Music // 1 hour ago
Seventeen play outlaws in 'Hot' music video teaser
May 23 (UPI) -- K-pop group Seventeen released a preview of its video for "Hot," the title track from its album "Face the Sun."

Music // 4 hours ago
Ozuna announces 2022 world tour
May 23 (UPI) -- Ozuna has announced a 38-stop world tour that will feature performances in Europe and North America. 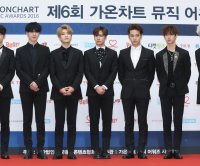