Carole King (L) and James Taylor perform on NBC's "Today" in June 2010. A documentary about King and Taylor is coming to CNN and HBO Max. File Photo by John Angelillo/UPI | License Photo

Oct. 19 (UPI) -- A music documentary about the partnership between Carole King and James Taylor is in production and heading to CNN and HBO Max.

The documentary will premiere on CNN with streaming and international distribution rights going to HBO Max.

King and Taylor have been friends for over 50 years and famously performed together at The Troubadour club in Los Angels in 1970. They returned to the venue in 2007 to celebrate its 50th anniversary.

Frank Marshall, who helmed HBO's The Bee Gees: How Can You Mend a Broken Heart, is directing and producing.

Musicians Danny Kortchmar, Russ Kunkel and Lee Sklar, who all worked with the duo, will be interviewed for the documentary along with King and Taylor.

"I've been listening to and playing their music my whole life, so it's especially meaningful to me and such an honor to be able to put together (a film about) this special reunion concert by these two extraordinarily gifted friends," Marshall said in a statement.

King will be inducted into the Rock and Roll Hall of Fame on Oct. 30. Taylor Swift and Jennifer Hudson will be presenters for King and will also perform.

Paul McCartney, Taylor Swift to present at Rock and Roll Hall of Fame induction ceremony Celine Dion documentary in production from Sony Music Entertainment What to watch next: Sign up for UPI's Streaming newsletter 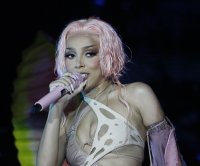