Mamamoo will release the compilation album "I Say Mamamoo: The Best" in September. File Photo by Keizo Mori/UPI | License Photo

The K-pop stars said Thursday they will release the album I Say Mamamoo: The Best on Sept. 15.

Mamamoo shared the news alongside a first teaser image for the album. The teaser features the group's name, the album title and a logo in the shape of a diamond.

I SAY MAMAMOO : THE BEST

I Say Mamamoo will feature new versions of Mamamoo's hit songs and B-sides, along with a new song.

The album will mark Mamamoo's first release since the EP WAW, released in June. It is also the first project since Solar, Moonbyul and Hwasa renewed their contracts with RBW. Wheein did not renew her contract but will continue to participate in group activities.

Mamamoo made its debut as a group in 2014. The group is known for the singles "You're the Best," "Décalcomanie," "Yes I Am" and "Starry Night." 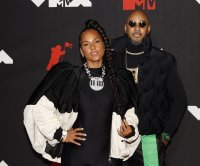