The Weeknd appears backstage during the annual Billboard Music Awards in May 2016. File Photo by Jim Ruymen/UPI | License Photo

The Weeknd arrives in the photo room during the MTV Europe Music Awards in November 2016. File Photo by Sven Hoogerhuis/UPI | License Photo

The Weeknd picks up the Single of the Year at the 2016 JUNO Awards in April 2016. File Photo by Heinz Ruckemann/UPI | License Photo

The Weeknd arrives on the red carpet for the 88th Academy Awards in February 2016. File Photo by Jim Ruymen/UPI | License Photo

The teaser trailer uses CGI graphics to depict a sun rising above the horizon.

The camera races towards the sun as the new, instrumental and synth-heavy music plays. The music features The Weeknd lightly crooning before his voice picks up.

The Weeknd last released the album After Hours in March 2020. The release featured the singles "Blinding Lights" and "Save Your Tears."

The singer will be joining BTS, Ed Sheeran, Lorde and more for the Global Citizen concert on Sept. 25.

Billboard Music Awards: The Weeknd wins big, Duran Duran returns to the stage BTS, The Weeknd, Ed Sheeran to headline Global Citizen concert What to watch next: Sign up for UPI's Streaming newsletter 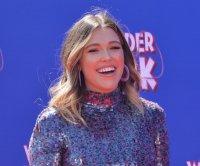