The 33-year-old made the announcement on Instagram Monday alongside a photo of herself doing the hand gesture to be quiet.

Lizzo wil be taking the stage at a number of music festivals and events, including Bonnaroo, which runs from Sept. 2-5, and the Global Citizen concert on Sept. 25.

Bonnaroo music festival to feature Foo Fighters, Lizzo, Tyler the Creator The Weeknd previews new music with CGI teaser: 'It starts tonight' What to watch next: Sign up for UPI's Streaming newsletter 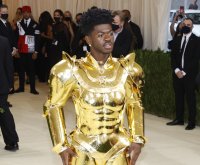