Paloma Faith says infant daughter is 'finally out of the hospital'

Paloma Faith gave an update after her six-week-old daughter was hospitalized for an infection. File Photo by Rune Hellestad/ UPI | License Photo

April 5 (UPI) -- Paloma Faith says her infant daughter has "finally" been discharged from the hospital.

The 39-year-old singer and actress gave an update Sunday on Instagram Stories after her six-week-old daughter was hospitalized for an infection.

"Finally out of the hospital but she has to have iv meds every day for a week," Faith said. "Praying for a speedy recovery #nhsheroes #nhs #saveournhs."

Faith previously said on Instagram that her baby girl had an "infection of some kind." 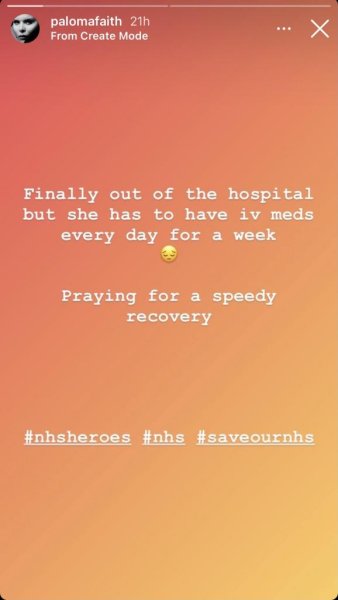 Paloma Faith gave an update after her six-week-old daughter was hospitalized for an infection. Photo by palomafaith/Instagram Stories

Faith gave birth to her daughter, her second child with her partner, Leyman Lahcine, in February.

"Well I'm not pregnant anymore! I had a planned c section yesterday. I'm in a lot of pain and didn't sleep last night but it's worth it to see and meet the new little cherub I have infront of me," she wrote on Instagram.

Faith and Lahcine also have a daughter born in December 2016. Faith announced in September that she was pregnant again after undergoing multiple rounds of in vitro fertilization.

"This child is so wanted, it's my 6th round of IVF and was a struggle to get here. I had a very traumatic first birth and I am also prone to postpartum depression," she said at the time.

In March, Faith said she and her daughter were both recovering from thrush but that her baby girl was doing well.

"Bubs is doing well and started to open her eyes and really look now, which is wonderful," she said.

Faith shared her struggles and frustrations with breastfeeding in a post last week.

Faith released her fifth studio album, Infinite Things, in November amid her pregnancy. She is also known for playing Bet Sykes on Pennyworth and for serving as a judge on The Voice Kids UK.