Beyoncé made history at the Grammys after winning multiple awards on Sunday, giving her a leading 28 wins over the course of her career. File Photo by Christine Chew/UPI | License Photo

Eilish took home Record of the Year for her song "Everything I Wanted." The singer was joined onstage by her brother, Finneas, and mentioned how she thought Megan Thee Stallion should have won instead.

"I was going to write a speech about how you deserve this, but then I was like, 'There's no way they're going to choose me,'" Eilish said.

Swift won Album of the Year for Folklore. The pop star was wearing a dress adorned with flowers and thanked her boyfriend, Joe Alwyn and friends Blake Lively and Ryan Reynolds.

Beyoncé made history at the awards show after winning Best R&B Performance for "Black Parade" and Best Rap Song for appearing on Megan Thee Stallion's "Savage."

Beyoncé now has more Grammy wins than any artist ever with 28.

"As an artist I believe it's my job and all our jobs to reflect the times, and it's been such a difficult time. So I wanted to uplift and encourage all of the Black queens and kings," Beyoncé said onstage while accepting the award for Best R&B Performance.

Beyoncé, earlier in the night, joined Megan Thee Stallion onstage as the rapper accepted the award for Best Rap Song.

Ricch was the last artist to take the stage for the night and performed "Heartless" and "The Box."

South Korean boy band BTS were present to perform their song "Dynamite." The group danced on a red carpet and ended the concert on the rooftop of a skyscraper.

This marked BTS' first performance at the Grammys.

Doja Cat gave a sci-fi performance of her song "Say So" and Lil Baby gave viewers a cinematic performance of his song "The Bigger Picture," which took place on the street.

The performance started with a Black man being arrested and then later shot by police before Lil Baby started the song. Lil Baby then rapped as protests took place around him. Killer Mike also made a special appearance.

Megan Thee Stallion also performed her hit song "Savage" on a golden stage and was joined by tap-dancers. Cardi B then arrived onto the scene rocking short hair for her newest song, "Up."

The duo joined forces to perform an edited version of "WAP." Cardi B danced on a stripper pole that was connected to a giant shoe atop a giant bed.

I don't cook, I don't clean But let me tell you how I got this ring (Ayy, ayy) #GRAMMYs pic.twitter.com/ZkYX2X9tSl— Recording Academy / GRAMMYs (@RecordingAcad) March 15, 2021

H.E.R. won Song of the Year for "I Can't Breathe," her track about George Floyd.

"Black Parade" by Beyoncé, "The Box" by Ricch, "Cardigan" by Swift, "Circles" by Malone, "Don't Start Now" by Lipa, "Everything I Wanted" by Billie Eillish and "If The World Was Ending" by JP Saxe featuring Julia Michaels were also nominated for Song of the Year.

Guyton performed "Black Like Me" and was followed by Lambert performing "Bluebird" and Morris performing "The Bones."

The Grammys additionally paid tribute to those in the music industry who have died over the past year.

Host Trevor Noah said the 1,000 people who died in the music industry over the last year can be viewed on the official Grammy website.

Swift gave a fairy-tale like performance of "Cardigan," "August" and "Willow."

She was joined onstage by her collaborators Aaron Dessner and Jack Antonoff. Swift started the performance by laying on the roof of a cottage before she joined Dessner and Antonoff.

The stage was made to look like a magical forest and fit the aesthetic of her two most recent albums, Folklore and Evermore.

We're excited to welcome @TaylorSwift13 back to the #GRAMMYs!

Performing not one or two, but three of her hits from 'folklore' and 'evermore.' pic.twitter.com/11RT651suQ— Recording Academy / GRAMMYs (@RecordingAcad) March 15, 2021

Silk Sonic, consisting of Mars and .Paak, made their first appearance at the Grammys with an old-school performance of their song "Leave the Door Open."

Mars and .Paak wore matching orange suits and were surrounded by sparkling lights. The concert paid homage to performances from the 1970s.

"I can't wait to dance to that at every wedding for the rest of my life," Noah said about "Leave the Door Open." Lambert then won Best Country Album for Wildcard.

Lipa performed both "Don't Start Now" and "Levitating" featuring DaBaby. Lipa's set featured an image of a full moon in the background and the singer donned a sparkling pink ensemble.

Lipa and DaBaby's careers were explored in special video packages that were released for each Record of the Year nominee throughout the night.

The rapper performed his song "Rockstar" featuring Ricch after his video, and Black Pumas performed "Colors" after their video.

Styles kicked off the 63rd annual Grammy Awards. He was the first artist to perform after opening remarks from Noah.

The singer was joined by a band inside of a circular room. Black Pumas, Haim, Billie Eilish and Finneas were also hanging out inside the room.

Styles performed "Watermelon Sugar" and watched as the others performed when it was their turn. Eilish stood on top of a car to sing "Everything I Wanted" before Haim performed "The Steps."

The ceremony paid tribute to independent venues that have been impacted by the COVID-19 pandemic. This included having bartenders, box office managers and others who work at the Troubadour and Hotel Café in Los Angeles, the Apollo Theater in New York City and the Station Inn in Nashville, presenting awards.

Grammys 2021: How to watch, what to expect Trevor Noah says Grammys will be like a 'jam session made for you at home' What to watch next: Sign up for UPI's Streaming newsletter 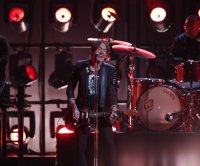