Brian Johnson has reunited with AC/DC after leaving the band in 2016. File Photo by Christine Chew/UPI | License Photo

No tour dates or album were announced.

In 2016, Williams retired and Johnson quit because he was suffering hearing issues.

A year earlier, Rudd pleaded guilty to charges of threatening to kill his personal assistant and possession of illegal drugs in New Zealand. He ultimately served eight months of home detention for the offenses.

David S. Goyer working on 'Batman' audio drama for Spotify Shannen Doherty cancer battle: 'I've got a lot of life in me' 'Borat' sequel to premiere on Amazon in October Zac Efron to star in 'Firestarter' remake 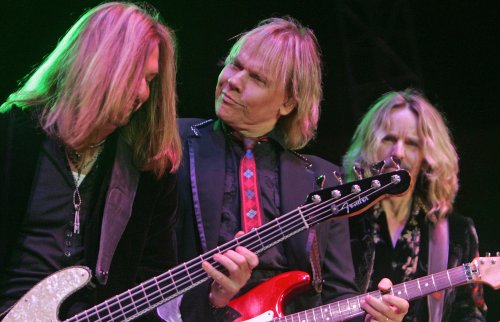 Music // 22 hours ago
Styx to release new album on June 14
May 7 (UPI) -- Rock band Styx has announced plans to release, "Crash of the Crown," its first new studio album in four years, on June 14.