Iggy Azalea has a son: 'I love him beyond words'

Iggy Azalea, who is dating Playboi Carti, confirmed she has a son but said she will keep his life private. File Photo by James Atoa/UPI | License Photo

The 30-year-old recording artist confirmed the news Wednesday on Instagram Stories but said she will keep her son's life private.

"I have a son," Azalea wrote. "I kept waiting for the right time to say something but it feel like the more time passes the more I realize I'm always going to feel anxious to share news that giant with the world."

"I want to keep his life private but wanted to make it clear he is not a secret & I love him beyond words," she said, adding a blue heart emoji. 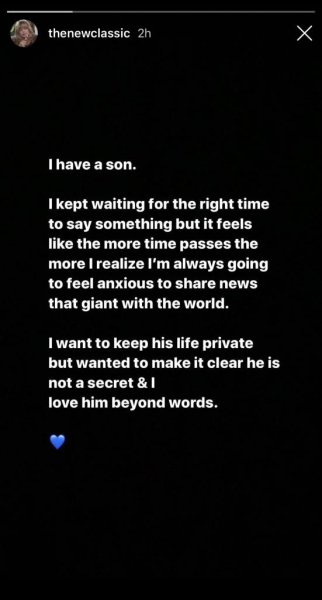 Iggy Azalea, who is dating Playboi Carti, confirmed she has a son but said she will keep his life private. Photo by iggyazalea/Instagram Stories

Azalea is dating American rapper Playboi Carti. Playboy Carti confirmed the relationship in the summer 2019 issue of Fader magazine after meeting Azalea in 2018.

"Once I started talking to her, I just cut off everybody," Playboi Carti said. "It was over with."

"I support everything she does," he added of Azalea's music.

Azalea sparked engagement rumors in July 2019 after showing off a diamond ring during an appearance on The X Change Rate. Azalea said amid pregnancy rumors in December that she was "single."

Azalea released her second studio album, In My Defense, in July 2019.

Music // 17 hours ago
Seventeen play outlaws in 'Hot' music video teaser
May 23 (UPI) -- K-pop group Seventeen released a preview of its video for "Hot," the title track from its album "Face the Sun."

Music // 21 hours ago
Ozuna announces 2022 world tour
May 23 (UPI) -- Ozuna has announced a 38-stop world tour that will feature performances in Europe and North America.

Music // 3 days ago
Doja Cat cancels upcoming summer tour dates due to tonsil surgery
May 20 (UPI) -- Doja Cat announced Friday on social media that she will no longer perform at festivals or open for The Weeknd on his tour this summer because of tonsil surgery.