The 24-year-old rapper will cover Nirvana songs during a live stream Friday at 6 p.m. EDT on his YouTube channel.

In an announcement, Malone said he will perform a set of "Nirvana hits and fan favorites." The show will raise funds for the COVID-19 Solidarity Response Fund for the World Health Organization (WHO).

Fans will be able to donate to the fund via a button on the screen during the performance. Google will match viewer donations "at a 2:1 rate," up to $5 million.

Malone has previously covered Nirvana, including a performance of "All Apologies" at House of Blues in Boston, Mass. Malone references late Nirvana frontman Kurt Cobain in his song "Goodbyes."

Other musical artists are also taking part in event for coronavirus relief. Bruce Springsteen, Halsey, Bon Jovi and other New Jersey natives will perform Wednesday during the Jersey 4 Jersey benefit concert for COVID-relief in the state.

In addition, Warner Music Group will stream the PlayOn Fest virtual music festival Friday through Sunday. The event features performances from Cardi B, Ed Sheeran, Coldplay and other acts, and will also raise funds for the COVID-19 Solidarity Response Fund for WHO.

Canadian artists are also coming together for coronavirus relief. Celine Dion, Shania Twain, Michael Bublé and other acts will perform Sunday during the Stronger Together, Tous Ensemble benefit concert.

Music // 11 hours ago
Ariana Grande performs live among flowers in 'POV' video
June 21 (UPI) -- Ariana Grande kicked off a live performance video series with Vevo with a performance of her song "POV." 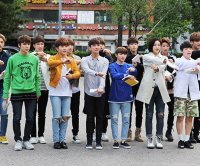