The video shows BTS creating "Black Swan" and features comments from the group's members. Jimin explains how his dance scene in a white outfit leads into his transformation into a "black swan."

"I'll be expressing that through my dance," the singer says.

BTS released a new video for "Black Swan" last week that shows the group dancing on a theater stage. The group's white outfits and black outfits convey their transformation from white swans to black swans.

"Black Swan" is the lead single from BTS' album Map of the Soul: 7, released in February. The album topped the Billboard 200 chart this week. 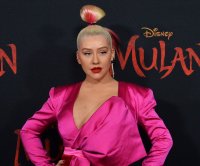