View this post on Instagram
Your 2020 Lineup! ... and this doesn't even include the campground Plazas Tickets on sale THURSDAY 1/9 at Noon ET! Get a GA ticket for just $35 down. Explore the Bonnaroo experience on Bonnaroo.com (link in bio!) #RadiatePositivity #Bonnaroo A post shared by bonnaroo (@bonnaroo) on Jan 7, 2020 at 5:57am PST

Festival organizers announced a lineup for the four-day festival Tuesday on Twitter.

"Your 2020 Lineup! ...and this doesn't even include the campground Plazas," the post reads.

The festival kicks off June 11 with the Grand Ole Opry and special guests, including Andy Frasco, Larkin Poe, Big Something and Liz Cooper & the Stampede.

Tool will headline the June 12 shows, with Miley Cyrus, Bassnectar, The 1975, Run the Jewels, Glass Animals, Young the Giant, Megan Thee Stallion, Tipper and other acts to also perform.

Tool released Fear Inoculum, its first new album in 13 years, in August, and is in the midst of an accompanying tour. Tame Impala will release its fourth studio album, The Slow Rush, on Feb. 14.

Lizzo released her third studio album, Cuz I Love You, in April, and is nominated for eight awards at the 2020 Grammys. She announced Sunday that she is taking a break from Twitter due to "too many trolls."

Lizzo taking break from Twitter due to 'trolls' Rascal Flatts to launch farewell tour in June Pat Sajak's daughter serves as letter-turner on 'Wheel of Fortune' 'This is Us': John Legend to guest star in Season 4 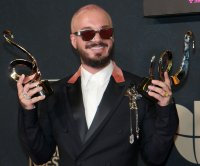