Nov. 27 (UPI) -- BTS member Jin is giving fans a behind-the-scenes look at the recording of his song "Tonight."

The 26-year-old South Korean singer shared footage Wednesday from the making of the solo song, his first-ever composition.

Jin released "Tonight" in June as part of BTS 2019 Festa, an annual event where BTS celebrates the anniversary of its debut with its fans, known as ARMY.

Jin previously released the solo songs "Awake" and "Epiphany." He also collaborated with BTS member V on the song "It's Definitely You" and with Jungkook on "So Far Away."

BTS has resumed activities after announcing a hiatus in August. The group teased new music in an interview with Paper this month.

"We are currently practicing and working on new songs so we can show you the best sides of ourselves. Please look forward to it," the group said.

Jin said he hopes to experiment in the rock genre in the future.

"I think it will come out great because our members are pretty charismatic," he said. 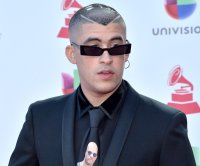