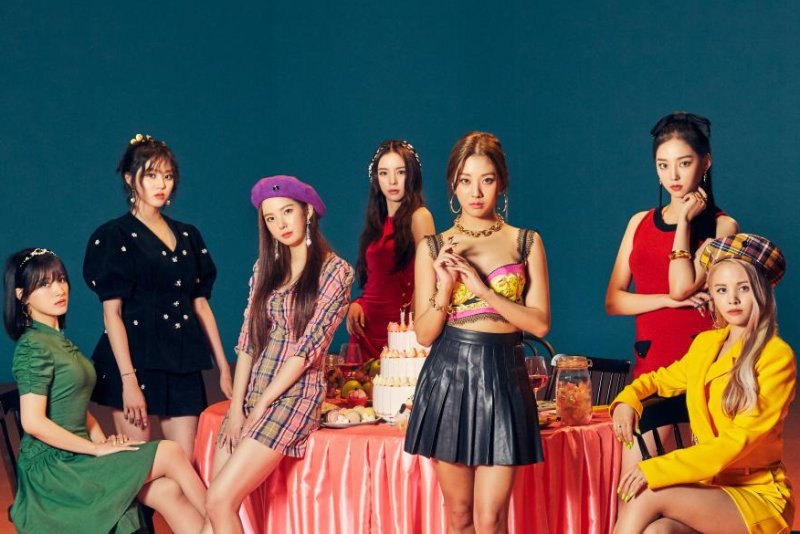 CLC members say they are hoping to release a full album and tour abroad in 2020. Photo courtesy of Cube Entertainment

The pastel-tinted "High Heels" in 2016 featured lots of aegyo (cuteness), flowy skirts and big bows and encouraged women to be confident. Later that year, "No Oh Oh" assigned a fruit to each member and had a youthful schoolgirl concept whilst touching on consent.

The act's aesthetics in its music videos quickly got the septet's first few years filed under the cute category. But CLC disagrees -- members don't see their early material within such a limited framework.

"We don't think that our previous songs were just cute," rapper Jang Yee-un told UPI recently through a translator at the offices of its label, Cube Entertainment's, in Seoul. "We have a sassiness in common in each song."

Fellow member and English-speaker Sorn (real name Chonnasorn Sajakul) chimed in to further explain: "Not too cute, not too strong, not too sexy, but in the middle."

Home to many iconic names in K-pop from the past and present, like 4Minute, Pentagon and (G)I-dle, CLC debuted under Cube as a five-piece group almost five years ago and then added two members a year later.

Today, Chang Seung-yeon, Oh Seung-hee, Choi Yu-jin, Sorn, Yee-un, Elkie (Chong Ting Yan), and Kwon Eun-bin make up one of the emblematic K-pop girl groups with a girl crush concept, which is a combination of empowering messages, strong choreographies, and fierce and confident attitudes. True to its name, it's a girl other girls look up to.

At a time when the "innocent" girl group concept dominated the idol scene, CLC opted for a revamp in 2017. The group went from the funky pop and playfulness of "No Oh Oh" to the chic, EDM banger "Hobgoblin" in eight months.

Though CLC adopted the girl crush concept and went for a darker, fashion-forward look, its sassiness remained intact -- it just was fiercer. "Hobgoblin" ultimately got the group on Korea's leading music chart, as well as Billboard's, for the first time in its career. This shift marked a new chapter for CLC: international recognition.

Since "Hobgoblin," the group has followed up with several other hits -- "Black Dress," and "No" also made it onto Billboard charts, and "Me" charted domestically.

"We feel very proud because we feel like we released our first EDM concept song at a time when no other group was doing it. So we feel really proud that we were able to open another new market for girl groups and not just a typical, everyday girl group song that you would hear," Sorn said.

"We were able to gain a lot of attention and new fans from all around the world. Also, a lot of artists said that they really respected us for doing this also."

Sorn said that a girl group doesn't always have to have that stereotypical type of always having to be cute.

"We can also be fierce and show our confidence on stage. We are very proud [of our work] and we hope we can inspire people," she said.

The group's latest release, September's "Devil," saw yet another switch in gears. This time, though, it was a throwback. Channeling the retro-feel from "Pepe" and referencing their past music videos, "Devil" portrays the members as women instead of girls and features a self-penned verse by Yee-un.

"We wanted to show the fans that we can do the girl crush concept and also a little softer than that. Because we felt like we were doing a lot of EDM, so it was time to kind of calm back down and show the fans a softer image," Sorn explained.

The members don't believe the concepts they try with each release are what defines their identity as a group, nor do the members consider one better than the other.

"I think that even if we do a cute song and a cute performance on stage, we still have self-confidence while doing so. But also, if we're doing something girl crush, we have the same self-confidence to go with that concept," Seung-hee said.

"Whichever performance or stage we're showing, it doesn't matter. We can show our confidence through the song. There's not a huge difference between those concepts."

The group's leader, Seung-yeon, added: "The self-confidence doesn't come from the concept. It's because we have self-confidence that we can show the various concepts." Around the table, the rest of the members applauded her.

CLC has yet to participate in creating its music (Yee-un does write her rap verses on its songs, and the group partakes in styling and music video decisions), but the members' goal is to embody the messages they convey to their fans, called Cheshire.

"We received a lot of messages via DM and other SNS from fans saying that they were very inspired and very encouraged by our lyrics," Eun-bin said. "The fact that we can encourage and empower other women, we're very thankful that we can be the ones [to do so]."

After wrapping up promotions for "Devil," CLC members mostly just rested and focused on their individual schedules. They have big goals that they hope to turn into plans next year, including a full album and promoting and touring abroad.

"Since next year is our fifth anniversary, I think it would be a good thing. It's more like a present for us too, to be able to meet our fans around the world and say thank you for the five years you guys have been supporting us," Sorn said.

Seung-yeon added: "We want to show an upgraded version of CLC's 'girl crush,' the 2020 version."