Selena Gomez releases music video for 'Lose You to Love Me'

Oct. 23 (UPI) -- Selena Gomez has released a new black and white music video for her latest song, "Lose You to Love Me."

The clip, uploaded to YouTube on Tuesday, features the pop star sitting down and singing to the camera as she confesses her feelings.

"Lose You to Love Me" was also released onto music streaming services such as Spotify, Apple Music and Amazon Music.

Gomez thanked fans for their support on Twitter and confirmed that the music video was shot on an iPhone.

"Thank you all for standing by my side through the highs and lows. I couldn't do it without you all and I can't wait to start my next adventure with you," she said.

Music // 17 hours ago
Taylor Swift fires back at Damon Albarn over songwriting comments
Jan. 25 (UPI) -- Taylor Swift called out David Albarn of Blur and Gorillaz fame on Twitter after the musician said that Swift did not write her own songs. 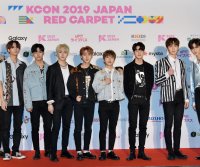