Minaj shared a video of "Mrs." and "Mr." mugs and hats reading "Bride" and "Groom," and captioned the post with her full legal name.

Singer Christina Aguilera, television personality La La Anthony and model Winnie Harlow were among those to congratulate Minaj and Petty in the comments.

"So happy for you Mrs.Bride you deserve all the happiness in the world," Harlow added.

Minaj and Petty, a registered sex offender in New York, were first linked in November 2018. Minaj confirmed on her Apple Music show, Queen Radio, in June that she and Petty had gotten their marriage license.

"I think I have what I was striving for, just happiness. It was so hard to get to a happy place. Now that I'm there I don't want to compromise that for anyone or anything," she said.

Minaj last released the single "Megatron" in June, and announced in September that she is retiring from music. Her most recent album, Queen, debuted in August 2018.

Music // 15 hours ago
Mavis Staples, Jeff Tweedy team up on new song for charity
April 2 (UPI) -- Mavis Staples released "All in It Together," a song featuring Wilco member Jeff Tweedy, with proceeds to benefit My Block, My Hood, My City. 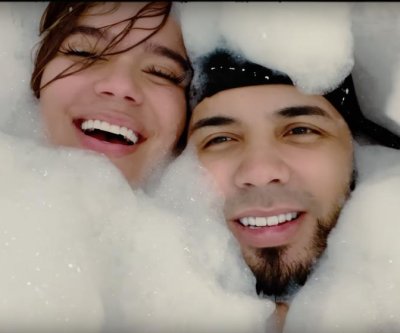 Music // 16 hours ago
Karol G, Anuel AA self-quarantine in 'Follow' music video
April 2 (UPI) -- Karol G and Anuel AA shared a video for the song "Follow," which the couple filmed while at home amid the coronavirus pandemic.

Music // 2 days ago
American AleXa's rise to K-pop warrior 'surreal'
LOS ANGELES, April 1 (UPI) -- American K-pop star AleXa talks to UPI about her rise to the top and her first EP, "Do Or Die," which will be released Wednesday.