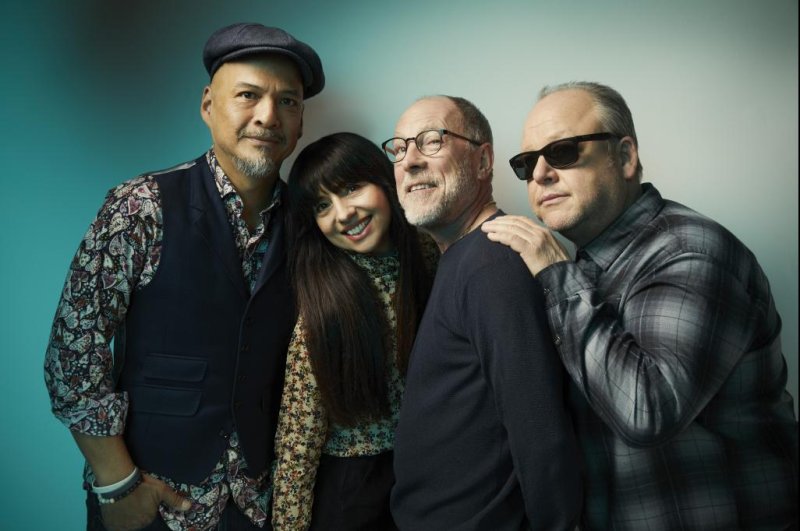 Pixies, from from left to right, Joey Santiago, Paz Lenchantin, David Lovering and Black Francis. Santiago said recording the band's latest album, "Beneath The Eyrie," "almost felt like how it felt doing our earlier records." Photo by Travis Shinn

Sept. 28 (UPI) -- Joey Santiago, lead guitarist and founding member of influential indie rock band Pixies, said recording their latest album, Beneath The Eyrie, felt like a return to the group's early days in the late 1980s and early 1990s.

Santiago, 54, who in 1986 founded Pixies with former University of Massachusetts-Amherst schoolmate Charles Thompson IV, aka Black Francis, told UPI in a recent interview that Beneath The Eyrie, which recently was released, felt like a return to form after a period of struggle for the group.

"I believe that we're rediscovering our voice and moving forward from there," Santiago said.

Pixies reformed in 2003 with the original lineup, including drummer David Lovering and bassist Kim Deal, after a sabbatical that began in 1993. The group didn't return to the recording studio until 2013, and Santiago said the process was fraught with obstacles, starting with Deal's departure from the group and continuing with her replacement, Kim Shattuck, being ousted less than a year later.

"We tried to make demos as a band, and it just wasn't gelling," Santiago said. "Kim, obviously, left the band, so that added a lot of wrinkles into our [process]. That first record, Indie Cindy, was quite a task to finish. We had a lot of challenges from the start to the end of it. Creating music was a problem."

The guitarist said some ensuing changes, including the arrival of bassist Paz Lenchantin -- formerly of A Perfect Circle, Zwan and Queens of the Stone Age -- helped get the band back on track in time for Beneath The Eyrie.

Lenchantin, who has three co-writing credits on the record, has become "a big part of the joy of the band," Santiago said.

"She's very positive, and we're very comfortable around her. She's got a good handle on what the Pixies are about, like she's subconsciously channeling the past for us," he said.

Santiago said recording Beneath The Eyrie felt like a more comfortable and collaborative process than previous recording experiences that followed the band's 2013 reformation.

"It almost felt like how it felt doing our earlier records. And that's that vibe, we had a lot of joy," he said. "Now we're feeling great, we feel like a real band."

Santiago said the songs on Beneath the Eyrie already feel like "part of the vernacular" the band established on classic albums like Surfer Rosa (1988) and Doolittle (1989). He said the new songs blend in so well with the old catalog that he didn't realize until after a recent show that they had played the entirety of the new record.

"We don't have a set list, so Charles calls them out on the microphone. At the end of the night I was told that we did all of the new album, and to me, that was unbelievable. It feels like it's just part of the fold now," he said.

The music of Pixies has been cited as a major influence by bands including Nirvana, Radiohead, Weezer and Modest Mouse. Santiago said the band's unique sound, which toys with quiet-loud dynamics and chugging guitars, was influenced by artists including the Velvet Underground, The Cars, Husker Du, Sonic Youth and Dinosaur Jr.

The sound of those early albums also was largely driven by an effort to stand out in the Boston music scene of the 1980s.

"There was a lot of heavy metal music, a lot of speed players," Santiago said. "We couldn't do that, anyway, and we had no interest in doing that. We were trying to go counter-culture, not go with the status quo."

The band's efforts resulted in debut album Surfer Rosa, followed one year later by sophomore recording Doolittle, which was certified Platinum in recognition of 1 million units sold in April 2019 -- 30 years after its release.

Santiago said the enduring popularity of that second record, which often has been included on lists of the most influential rock albums of all time, didn't come as a surprise.

"We knew we had something special in Doolittle. We were playing it in the studio and we knew it was good, we knew it was solid. It had that timeless element to it already. It was different enough to stand out from the crowd. Different, but good," he said.

Santiago said he sees each Pixies record as its own entity, "like a person."

"That's Mr. Doolittle, this is Mr. Beneath The Eyrie -- what are you going to do out there? It's beyond our control. So when people meet them, and shake hands with them, it's like, 'That's great!' They like it," he said.

"Once it's out there, it's just like a kid. We took care of it, we fed it well, we taught it a lot of things, now it's out there. Good luck to you. That's the way we feel about records. It's another being that's out there hanging out."

The band is touring Britain to promote Beneath The Eyrie. The live show eschews the traditional stage patter and banter favored by many of Pixies' fellow rock bands, instead going directly from one song to the next for the duration of the set.

"Our job is to play music," Santiago said. "Hopefully, the crowd's not there for us to say 'hello' to them -- we say 'hello' to them by playing music. There's nothing really special to say in between songs -- the only thing that's important once we get into the building is the music."

"We played some Cars music and just reminisced," Santiago said. "They had a big influence on us, those chugging guitars are what made us chug. ... They were the chugging band, until us."

Santiago said hearing his influence on the music of the past 30 years "doesn't sound strange at all." In fact, he said, it comes with being "part of the scene."

"Every band gets influenced by something, and we've been around for long enough for people to listen to our records and bands to get influenced by it -- just like we did, too," he said.

His message to bands that borrow from Pixies in crafting their own sound is simple: "Kudos, great. That's all I can say."

Santiago said he doesn't listen to a lot of current popular music, but he was recently impressed by rock group the Idles' performance on NPR's Tiny Desk Sessions.

"I haven't heard the record, but when I saw them on the Tiny Desk Session, I thought they were fantastic. They had humor, they were punky, they seem to have something," he said.

Beneath The Eyrie is available now on CD, vinyl, cassette and digital platforms.

Music // 19 hours ago
Adele to launch Las Vegas residency show in January
Nov. 30 (UPI) -- Adele shared plans for "Weekends with Adele," a residency show at The Colosseum at Caesars Palace in Las Vegas.