Oh My Girl shared a clip of their "SSFWL" video ahead of the release of their album "The Fifth Season." File Photo by Yonhap News Agency/EPA-EFE

May 6 (UPI) -- South Korean girl group Oh My Girl is giving fans a glimpse of its new music video.

The K-pop stars shared a clip of their video for the new single "SSWFL" on Monday.

The teaser opens in a snowy landscape before changing to a field of flowers. Hyojung, Mimi, YooA, Seunghee, Jiho, Binnie and Arin are also shown in a brightly-lit room.

Oh My Girl shared the lyrics for "SSFWL" in a tweet Sunday.

Oh My Girl is known for the singles "Windy Day," Listen to My Word (A-ing)" and "Secret Garden." The group released its debut Japanese album in January. 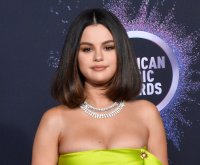