Christina Aguilera denies 'swinging' at Pink during past feud

Feb. 1 (UPI) -- Christina Aguilera says she never swung at Pink during the height of their rumored feud.

The 38-year-old singer said on Thursday's episode of Watch What Happens Live that she tried to kiss, not punch, Pink during a night at a club following the recording of "Lady Marmalade."

"I seem to have a different memory of a night we had at a club where we played Spin the Bottle," Aguilera told host Andy Cohen. "I have a love memory."

Aguilera did confirm she clashed with Pink while collaborating with the singer, Mya and Lil' Kim on a cover of "Lady Marmalade" for the Moulin Rouge soundtrack.

"I've seen her Behind the Music and I know she had some, you know, feelings or whatever about how the recording of 'Lady Marmalade' went down and all that," the star said.

"I know [on] the actual video she intimidated me a lot because she was heckling me in the audience a little bit behind the director. I was like, 'What's going on?'" she recalled. "She's a different person now. She's, like, a mom. She's cool."

Pink had said on Watch What Happens Live in October 2017 that Aguilera tried to punch her during a night out.

"I think I'm an alpha, and she's an alpha," the singer explained. "I'm used to taking my altercations physical and she's used to having them verbal. We just are very different, we're very different. And we were very young and new."

Aguilera and Pink have made up since their reported feud. Pink told The Sun in December 2017 that she and Aguilera had recorded a new duet, but said she wasn't sure if the song would be released. 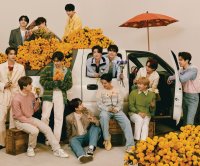