Jan. 19 (UPI) -- Sony reportedly will no longer release new music from R. Kelly and his name has been removed from the website of its parent company RCA Records.

The New York Times said Kelly was dropped in response to weeks of protests regarding sexual abuse allegations that were again brought to light in the television documentary Surviving R. Kelly.

Throughout the years, Kelly was acquitted of child pornography charges and accused by numerous women and underage girls of sexual abuse. He has denied any wrongdoing.

Despite the professional split, RCA/Sony will retain Kelly's back catalog of songs, Variety reported.

Don Russell, an adviser and consultant to the musician, told Rolling Stone it is unclear what will happen regarding the two remaining albums Kelly was supposed to release through the label.

"We understand RCA's position: they have to remain transparent for the sake of the other artists that they represent and generate wealth for," Russell said. "They're not in the position of dealing with the kind of stuff that has come about with R. Kelly. He has no issue with RCA. I think he's outgrown RCA. He's ready for the next level of life, anyway. It makes sense for them to shake hands and say, 'This train has run its course and I wish you guys the best and let's move on.'"

Music // 9 hours ago
TXT brings in pH-1, Woodie Gochild for '0X1=Lovesong' remix
June 23 (UPI) -- South Korean boy band TXT announced on Wednesday that pH-1 and Woodie Gochild will be joining them on the remix to "0X1=Lovesong (I Know I Love You) Remix" featuring Seori. 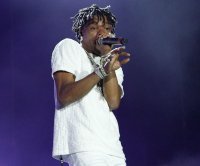