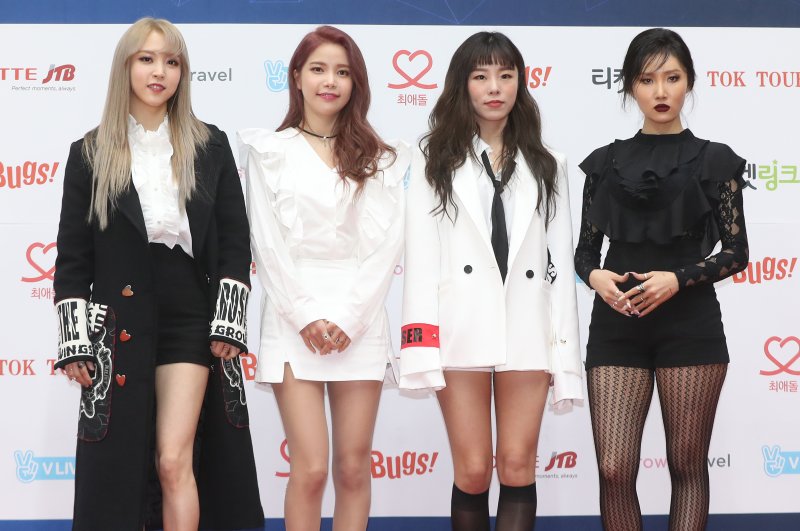 Mamamoo will return this month with an autumn-themed album. File Photo by Yonhap News Agency/EPA

The Korea Herald confirmed the K-pop stars will return Nov. 29 with an autumn-themed album.

The new EP will be the third installment in Mamamoo's Four Seasons, Four Colors series. The group previously released the EP Yellow Flower in March and the EP Red Moon in July.

The Four Seasons, Four Colors project centers on Mamamoo's four members each representing a color and object. Solar is blue and the sun, Hwasa yellow and flowers, Moonbyul red and the moon and Wheein white and wind.

Mamamoo made its official debut as a group in June 2014. The K-pop stars are known for the singles "You're the Best," "Yes I Am," "Starry Night" and "Rainy Season."

Music // 16 hours ago
Seventeen share 'Chapter7:teen' video on 7th anniversary
May 25 (UPI) -- K-pop group Seventeen released a special video for fans in honor of its seventh anniversary as a group.

Music // 1 day ago
Seventeen want everybody to dance in 'Hot' music video teaser
May 24 (UPI) -- K-pop group Seventeen shared a new preview of its video for "Hot," the title track from its album "Face the Sun."

Music // 1 day ago
Wynonna Judd, Waxahatchee team up for duet 'Other Side'
May 24 (UPI) -- Wynonna Judd and Katie Crutchfield of Waxahatchee have joined forces for a new collaborative song titled "Other Side."

Music // 2 days ago
Seventeen play outlaws in 'Hot' music video teaser
May 23 (UPI) -- K-pop group Seventeen released a preview of its video for "Hot," the title track from its album "Face the Sun."

Music // 2 days ago
Ozuna announces 2022 world tour
May 23 (UPI) -- Ozuna has announced a 38-stop world tour that will feature performances in Europe and North America.
Advertisement