Sept. 27 (UPI) -- Avril Lavigne sings about survival on a serene beach in a new music video for her latest single, "Head Above Water."

Lavigne wears a flowing white dress in the video as she performs in Iceland among rocky landscapes and a deep ocean which she falls into.

Lavigne posted her thoughts on Twitter on the video, thanking those who her helped craft the visuals and the song.

"It makes my heart so unbelievably full to premiere the #HeadAboveWater music video for you all today, on my birthday," she said. "From the very first day I started writing this song, I have been inspired and gathering visuals and imagining what the music video could look like."

Lavigne, who has remained away from the spotlight since 2014 due to her battle with Lyme disease, previously said that she came up with "Head Above Water" during an extremely challenging time.

"The first song I am choosing to release is called 'Head Above Water.' It is also the first song I wrote from my bed during one of the scariest moments of my life. I had accepted death and could feel my body shutting down. I felt like I was drowning. Like I was going under water and I just needed to come up for air," she said. 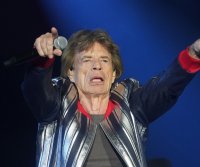