Pink cancels show due to illness: 'I'm doing the absolute best I can'

Pink defended herself on Instagram after postponing her show Saturday in Sydney. File Photo by Kamil Krzaczynski/UPI | License Photo

Aug. 3 (UPI) -- Pink spoke out Thursday after canceling a show due to illness.

The 38-year-old singer defended herself in a lengthy Instagram post after she was spotted with her kids at a beach in Byron Bay, Australia, after postponing a concert scheduled to take place Saturday in Sydney.

Pink posted a screenshot of a tabloid photo and the headline "Pink's Sydney concert canceled as she chills in Bryon Bay." She said in the caption she's had two doctors visits and is on several medications.

"This break in Byron has been scheduled since 2017, as a way to get outside the hotel and the winter and have some time with my children. I've already been sick twice (kids as well) on this Australian tour, but the first time we got sick, I was able to push through," the star wrote.

"This time, what these parasite paparazzi don't show you, is two doctor visits in Byron on two consecutive days, antibiotics, steroids, Vick's, nose spray, throat spray, more steroids, NyQuil, a screaming baby in the middle of the night, every night, while mama gives him warm baths tells her daughter everything is fine," she said.

Pink's children, 7-year-old daughter Willow and 20-month-old son Jameson, are accompanying the singer for the entirety of her Beautiful Trauma tour.

"You can think whatever you want, it's your right, but I have never taken advantage of any one in my entire life," Pink said. "I have never phoned in a single tour, I have an impeccable record for not cancelling. I mother with everything I have whilst handling all the rest."

"I'm doing the absolute best I can, and you can believe it or not," she added. "I will see everyone tomorrow whether I'm better or not, and the postponed show will be reschedule. As I said, I'm sorry to the real fans who this situation has affected."

Pink announced the cancellation and apologized to fans in a tweet Wednesday.

"Hi my Sydney friends. It is with great frustration that I bring you this news :( Friday's show will be postponed," the star wrote. "I was hoping a couple days of rest would help me kick this sick, but not at the speed I was hoping for. I appreciate your well wishes and understanding + I'm sorry."

Hi my Sydney friends. It is with great frustration that I bring you this news:( Friday’s show will be postponed. I was hoping a couple of days of rest would help me kick this sick, but not at the speed I was hoping for. I appreciate your well wishes and understanding + I’m sorry.

Live Nation, who produces Pink's tour, said in a statement to People that Pink is "suffering from an upper respiratory infection."

Music // 1 hour ago
Doja Cat assists a queen in 'Woman' music video
Dec. 3 (UPI) -- Doja Cat released a music video for "Woman," the latest single from her album "Planet Her."

Music // 2 hours ago
SZA shares 'I Hate U' single after SoundCloud release
Dec. 3 (UPI) -- SZA officially released her song "I Hate U" after sharing the track on an anonymous SoundCloud account in August. 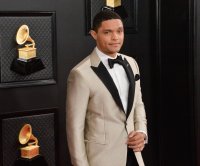