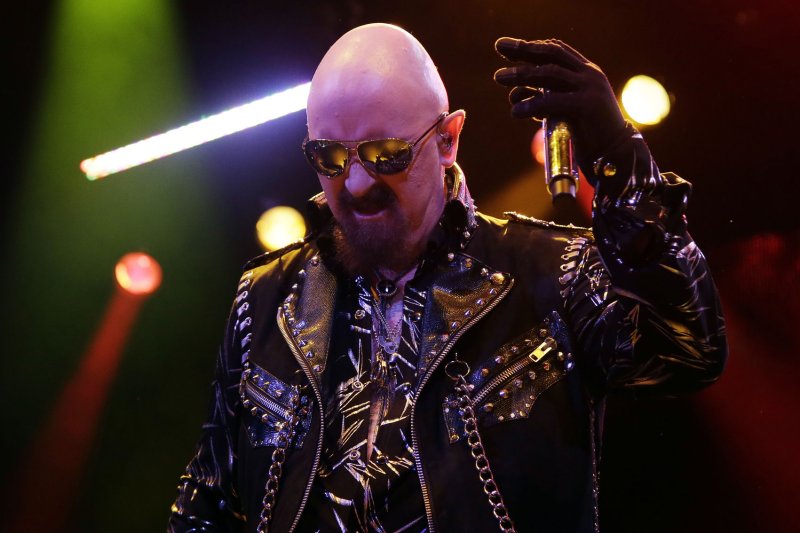 Rob Halford of Judas Priest. The band will be going on tour this August with Deep Purple. File Photo by John Angelillo/UPI | License Photo

From left to right, Ian Gillan, Ian Paice and Roger Glover of Deep Purple with Lars Ulrich of Metallica at the Rock And Roll Hall of Fame induction ceremony in 2016. File Photo by Dennis Van Tine/UPI | License Photo

The tour begins Aug. 21 at the Riverbend Music Center in Cincinnati before wrapping up Sept. 30 at the Toyota Amphitheatre in Wheatland, Calif. The bands will be performing in 25 cities, including Chicago, Detroit, Montreal, Atlanta, Denver and San Diego.

Tickets for the general public go on sale at 10 a.m. April 27 through LiveNation.

Judas Priest released their 18th studio album , Firepower, in March. The project debuted at No. 5 on the Billboard 200 charts, making it Judas Priest's highest charting album in the United States. Deep Purple's latest album inFinite, was released in April 2017.

Judas Priest was nominated to join the Rock and Roll Hall of Fame class of 2018, however, they did not make the final cut. Deep Purple was inducted into the Hall of Fame in 2016.

Music // 3 days ago
Dreamcatcher shares 'BEcause' dance preview
July 29 (UPI) -- K-pop stars Dreamcatcher released a clip of their music video for "BEcause," the title track from their EP "Summer Holiday."