Austin turned heads in a formfitting black dress with a one-shoulder neckline and cutouts on both sides. She cozied up to Ice-T, who wore a long, double-breasted coat over a shirt and pants.

"Grammy arrivals! Me and my boo looking sharp in black," she wrote. "So happy for my mans nomination for the song, 'Black Hoodie' #BodyCount."

Austin and Ice-T married in January 2002 and share 2-year-old daughter Chanel. The couple couldn't help but gush in an interview with Entertainment Tonight about their daughter, whom Austin often wears matching looks with.

"I mean, [she's] like my real-life doll. I get to dress her up and we get to match all day. It's funny," the television personality said at the awards show. "I didn't even think I was going to be that parent, but I turned into one."

Ice-T said he and Austin have taken to calling Chanel "two teen" because she rules over their household like a teenager.

"She has absolute control over me," he said. "But she's real fun. It's, like, the best thing that happened to us."

Music // 20 hours ago
Seventeen shares 'Your Choice' highlight medley
June 14 (UPI) -- K-pop group Seventeen released clips of "Ready to Love" and five other songs from its EP "Your Choice."

Music // 22 hours ago
Kiss to resume 'End of the Road' tour in August
June 14 (UPI) -- Kiss announced new dates for its "End of the Road" world tour, its final tour as a band. 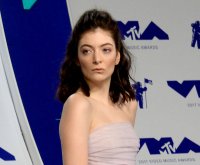