Carrie Underwood said she got over 40 stitches in her face following a November incident where she also broke her wrist. File Photo by John Sommers II/UPI | License Photo

The 34-year-old singer said in a post to her fan club members that she got more than 40 stitches in her face following a November incident where she also broke her wrist.

"There is also another part of the story that I haven't been ready to talk about since I have still been living it and there has been so much uncertainty as to how things will end up," Underwood explained, according to Entertainment Tonight.

"In addition to breaking my wrist, I somehow managed to injure my face as well," she shared. "I'll spare you the gruesome details, but when I came out of surgery the night of my fall, the doctor told [my husband] Mike [Fisher] that he had put between 40 and 50 stitches in."

"Now, here we are 7 weeks later and, even though I've had the best people helping me, I'm still healing and not quite looking the same," the star said. "I honestly don't know how things are going to end up but I do know this: I am grateful. I am grateful that it wasn't much, much worse."

Underwood had thanked fans for their support Nov. 12 after confirming she broke her wrist and suffered cuts and abrasions after falling on the steps outside her home.

"Thanks so much for all the well wishes everybody...I'll be alright...might just take some time...glad I've got the best hubby in the world to take care of me," she tweeted at the time.

Underwood said in her update that she isn't ready "to get in front of a camera" but is "determined to make 2018 amazing." She posted a photo of herself Dec. 27 on Instagram with the majority of her face obscured by a scarf.

"When in 5 degree weather, wrap your @caliabycarrie scarf around your neck and face...you keep warm AND look like an awesome winter snow ninja! #WinWin #StayThePath #LetItSnow #BabyItsColdOutside," the singer captioned the picture.

When in 5 degree weather, wrap your @caliabycarrie scarf around your neck and face...you keep warm AND look like an awesome winter snow ninja! #WinWin #StayThePath #LetItSnow #BabyItsColdOutside ❄️ ⛄️ 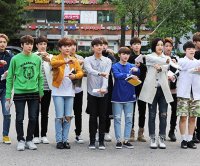 Music // 18 hours ago
Adele to launch Las Vegas residency show in January
Nov. 30 (UPI) -- Adele shared plans for "Weekends with Adele," a residency show at The Colosseum at Caesars Palace in Las Vegas. 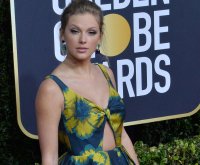