The singer said "yes" to entrepreneur and dad-of-one Tommicus Walker.

The 36-year-old singer and actress said "yes" to Tommicus Walker on Wednesday, a little more than a year after her divorce from Rob Hillman went public.

"I said, 'Yes yeeeesssss' on his Burfday!! #issaengagement #GodShowedout #HesaGoodManSavanah #LoveWins #8/16/17," she captioned a photo on Instagram of her massive engagement ring.

Luckett's brother, Gavin Luckett, shared a video and photos from Walker's proposal. He said Walker shocked Luckett by proposing at the surprise dinner the singer threw for her beau's birthday.

"That one time @letoyaluckett planned a surprise Bday dinner for @iamtwalk2 but he had a bigger surprise for her," Gavin wrote. "Congrats y'all!!!"

That one time @letoyaluckett planned a surprise Bday dinner for @iamtwalk2 but he had a bigger surprise for her 💍 Congrats y'all!!!

TMZ reported in August 2016 that Luckett had split from Hillman two months after they married in January 2016. The singer later explained her divorce from Hillman, who goes by the name Rob Hill, Sr., in an interview with The Breakfast Club.

"I think ... anytime you open up and allow yourself to love and love hard, that's the risk you take of it possibly not working out. And although we really did love and care for each other, it just didn't turn out the way we wanted it to," she said.

"I wish him the best," the star said. "I'm just in a great space right now and I'm sure he is too. I'd rather not go backward."

Luckett came to fame as an original member of Destiny's Child, and later pursued a solo career. She released her third alum, Back 2 Life, in May, which includes the singles Used To and In the Name.

Music // 23 hours ago
Liz Phair to release new album 'Soberish' on June 4
April 14 (UPI) -- Liz Phair has announced that her first album in 11 years titled "Soberish" is set to be released on June 4 through Chrysalis Records. 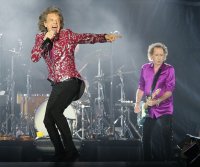