The rumored couple were first linked in 2009.

Rihanna at the Billboard Music Awards on May 22. File Photo by Jim Ruymen/UPI | License Photo

The 29-year-old rapper and 28-year-old singer shared a smooch after Rihanna made a surprise appearance at Drake's sold-out concert at American Airlines Arena.

The onstage kiss came just days after the pair's tender moment at the 2016 MTV Video Music Awards. The stars smooched after Drake confessed his love for Rihanna while presenting her with the Video Vanguard Award.

"She's someone I've been in love with since I was 22 years old," the rapper had gushed. "She's one of my best friends in the world."

"She succeeds by doing something that no one in this music industry does, which is being herself," he lauded. "All my adult life, I've looked up to her even though she's younger than me. She's a living, breathing legend in our industry."

Drake and Rihanna were first linked in 2009 but have consistently downplayed their relationship in interviews. The pair were spotted dancing and kissing at E11EVEN club in Miami following Drake's show Tuesday.

"[They] acted really coupley," a source told People. "[Rihanna seemed] totally comfortable and natural.[She was] laughing and smiling, and just having a good time."

"They were standing next to each other all night," the insider added. "He was whispering in her ear and she was rubbing his neck."

Drake, who last released the album Views in April, is presently on his Summer Sixteen tour with Future. Rihanna, meanwhile, is on her Anti tour in support of her album of the same name. 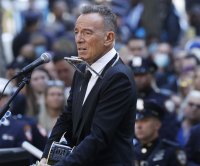 Music // 2 days ago
Fugees to reunite for 'The Score' anniversary tour
Sept. 21 (UPI) -- Lauryn Hill, Wyclef Jean and Pras Michel of the Fugees will kick off their first tour in 25 years Wednesday in New York.