The singer released her last solo record, "Artpop," in November 2013.

Lady Gaga at the Costume Institute Benefit at the Metropolitan Museum of Art on May 4. File photo by John Angelillo/UPI | License Photo

The 29-year-old singer shared a selfie on the photo sharing site with the simple caption "LG5 time."

The news comes just two days after Lady Gaga brought her Cheek to Cheek tour with Tony Bennett to a close. The tour was in support of their collaborative album of the same name, and finished at the Kennedy Center in Washington, D.C., ahead of Bennett's 89th birthday.

"I'm so sad that this tour is ending. I will never forget it as long as I live. And maybe longer," the star captioned a picture of herself with Bennett. She also posted a snapshot of the elaborate birthday cake she got the singer.

Lady Gaga and Bennett released Cheek to Cheek in September 2014. The singer's last solo record, Artpop, debuted in November 2013, and topped the Billboard 200 upon its release. The album includes the singles "Applause" and "Do What U Want."

The star is also slated to appear on FX series American Horror Story: Hotel. The show's fifth season will feature Lady Gaga in an evil role and a love triangle between the singer, Finn Wittrock and Matt Bomer. Hotel will premiere in October. 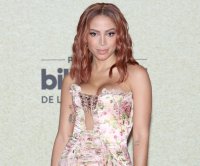