The singer released her fifth studio album, "Platinum," on Tuesday. 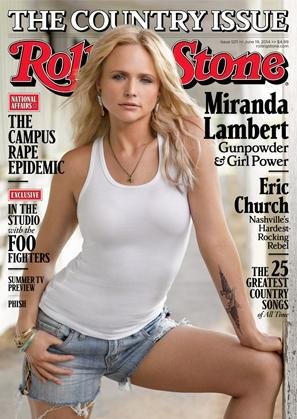 The 30-year-old singer and Eric Church cover two editions of the special country issue. The issue coincides with the RollingStoneCountry.com launch this week -- a new website that features news and articles about country music stars.

Lambert spoke to the magazine in Tishomingo, Okla., where she currently lives with husband and fellow country music star Blake Shelton. The singer shared her plans for her Pink Pistol clothing line and her future bed-and-breakfast, and also revealed her obsession with Beyoncé.

"She's a girl from Houston, and she worked her butt off to get where she is," Lambert lauds. "She's not just being carted around on her chariot; she's driving it."

"It was pretty instantaneous," she adds of her own rise to fame. "One day [Shelton and I] were country singers, and the next we're on the front of the tabloids. I'm, like, really magical. I've been pregnant for two and a half years."

Lambert released her fifth studio album, Platinum, on Tuesday. The record includes the lead single "Automatic," which reached the top ten on the Billboard Hot Country Songs. The album also features a duet with Carrie Underwood, and collaborations with Little Big Town and The Time Jumpers.