Justin Bieber attends the premiere of "Justin Bieber's Believe'", a backstage and on stage memoir concert film that documents his rise to super stardom, at Regal Cinemas in Los Angeles on December 18, 2013. UPI/Jim Ruymen | License Photo

The White House, which has promised to address two online petitions signed by more than 120,000 people by midday Wednesday (https://petitions.whitehouse.gov/petitions/all/0/2/0), has not responded to the Bieber complaint yet, the Hollywood Reporter said Wednesday.

"We would like to see the dangerous, reckless, destructive, and drug abusing, Justin Bieber deported and his green card revoked. He is not only threatening the safety of our people but he is also a terrible influence on our nations youth. We the people would like to remove Justin Bieber from our society," one of the petitions said.

The 19-year-old pop star is to be arraigned Feb. 14 in Miami Beach, Fla. He is accused of driving under the influence, drag racing, resisting arrest and having an expired driver's license. He is also under investigation for allegedly vandalizing his neighbor's home in Calabasas, Calif., earlier this month.

TMZ has reported Bieber has been drinking alcohol, smoking marijuana and consuming soda mixed with codeine cough syrup, as well.

THR said Bieber is living in the United States through an O-1 visa, which is issued to people with "extraordinary ability or achievement" in their fields, including the arts.

A conviction for an aggravated offense could see Bieber's work visa revoked; however, none of the charges he currently faces are for violent crimes, nor are likely to carry much jail time if he is convicted, THR said. 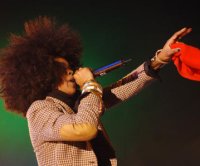 Music // 4 days ago
Pentagon pose, play pool in 'Feelin' Like' music video teaser
Jan. 19 (UPI) -- K-pop group Pentagon shared a preview of its video for "Feelin' Like," the title track from its EP "In:vite U."