Justin Bieber attends the premiere of "Justin Bieber's Believe'", a backstage and on stage memoir concert film that documents his rise to super stardom, at Regal Cinemas in Los Angeles on December 18, 2013. UPI/Jim Ruymen | License Photo

Bieber, 19, remains in police custody after he was arrested in Miami Beach Thursday for allegedly driving a Lamborghini under the influence of drugs and/or alcohol, drag racing, resisting arrest without violence and driving without a valid license.

Tests taken after his arrest showed Bieber was under the influence of drugs, Miami Beach Police Chief Raymond Martinez told the Herald.

Police said they stopped Bieber because they saw him racing shortly after leaving a nightclub, then determined he was intoxicated, TMZ said, adding the singer allegedly failed a field sobriety test.

People.com said Bieber has been in Miami all week and visited a strip club with friends Monday night.

In a separate criminal case, the teen is under investigation for allegedly throwing eggs at a neighbor's home in Los Angeles several weeks ago. The neighbor said the prank caused thousands of dollars in damage.

TMZ has said Bieber's management is concerned about his outrageous behavior and wants him to check into rehab.

Captain & Tennille getting a divorce 'Wipeout' renewed for a seventh season 'High Hopes' tops the U.S. album chart The Wanted announces it is disbanding this spring Joe Wright to direct Peter Pan film for Warner Bros. 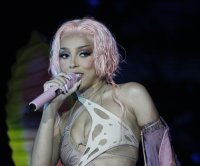