LOS ANGELES, Sept. 2 (UPI) -- Lyricist Hal David, who won an Oscar for "Raindrops Keep Fallin' on My Head," died of a stroke Saturday in Los Angeles, his wife said. He was 91.

David often teamed with Burt Bacharach and besides "Raindrops" they had three other songs nominated for Academy Awards -- "What's New, Pussycat?," "Alfie" and "The Look of Love."

Other David hits included "Do You Know the Way to San Jose?," "What Do You Get When You Fall in Love?," "Always Something There to Remind Me," "The Man Who Shot Liberty Valance,""A House Is Not a Home," and "What the World Needs Now."

Singer Dionne Warwick was a frequent benefactor of David and Bacharach's work. Perry Como, Dusty Springfield, Gene Pitney and Karen Carpenter were a few of the others who had success with David's songs.

Besides his wife, David is survived by two sons and three grandchildren. His first wife Anne died in 1987. 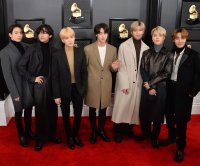