Lady Gaga has been recording her upcoming "Artpop" album naked because she says it makes her voice sound better, a British tabloid reported. May 8 file photo. UPI/Keizo Mori | License Photo

LONDON, Aug. 27 (UPI) -- Lady Gaga has been recording her upcoming "Artpop" album naked because she says it makes her voice sound better, a British tabloid reported.

"Gaga has really taken to the idea of naked recording," The Sun quoted a source as saying. "She has been recording vocals while she's been completely starkers. She thinks it makes her voice sound better."

Lady Gaga, who is recording the album during her Born This Way Ball tour, sent out a nude photo of herself over Twitter last month sitting in a chair with her legs and arms protecting her modesty.

The Sun said, "Lady Gaga loves getting naked so much she should join a rugby team."

Rugby players are notorious for getting drunk and naked.

The singer is to perform at London's 82,000-seat Twickenham Stadium Sept. 8-9. The stadium is the home of English rugby.

Music // 6 hours ago
Fugees to reunite for 'The Score' anniversary tour
Sept. 21 (UPI) -- Lauryn Hill, Wyclef Jean and Pras Michel of the Fugees will kick off their first tour in 25 years Wednesday in New York. 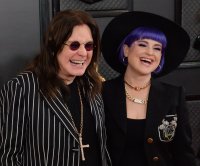