Vanessa Paradis arrives for the premiere of 'Cafe de Flore' at the Princess of Wales Theatre during the Toronto International Film Festival in Toronto, Canada on September 12, 2011. UPI/Christine Chew | License Photo

The couple have a son and daughter together.

"The rumors are not true. They are absolutely not true," The Sun newspaper quoted the "Dark Shadows" actor as saying at the film's London premiere Wednesday.

"No matter what I say about this, people believe the opposite," Depp said of the breakup buzz. "I can't say enough about it not being over."

However, People.com said Paradis did not attend this week's London event with Depp, nor has she been seen publicly with him in months. 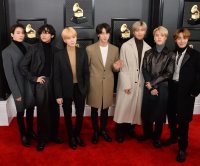