Brooks, Smith to be inducted in to Country Hall of Fame

Garth Brooks performs for U.S. President-elect Barak Obama at the "We Are One" Inaugural Celebration at the Lincoln Memorial on January 18, 2009. (UPI Photo/Dennis Brack/Pool) | License Photo

NASHVILLE, March 7 (UPI) -- Garth Brooks, Hargus "Pig" Robbins and Connie Smith are to be inducted in to the Country Music Hall of Fame, it was announced in Nashville.

"There are great artists and talents, and then there are Connie, 'Pig,' and Garth," Steve Moore, County Music Association's chief executive officer, said in a statement Wednesday.

"Connie has been one of the most celebrated female voices in music for more than 45 years, setting a golden standard for the thousands of female vocalists who came after her," the statement said. "'Pig' overcame adversity to become one of the most sought-after session musicians in the industry, contributing his considerable talents to classic songs that have been treasured by fans all over the world since the late '50s. And, Garth led modern country music to unbelievable heights of commercial success and pop culture relevance after bursting onto the scene as part of the now-legendary 'Class of 1989.' These three artists are more than just performers... they are forces of nature who are deservedly entering the Country Music Hall of Fame."

The CMA did not say when the 2012 induction ceremony will take place. 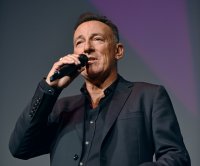