Calle 13, Eduardo JosŽ Cabra Mart’nez (L) and RenŽ PŽrez Joglar appear backstage with some of the 19 awards including Record of the Year and Album of the Year they won at the 12th annual Latin Grammy Awards at the Mandalay Bay in Las Vegas, Nevada on November 10, 2011. UPI/Jim Ruymen | License Photo

Billboard.com said the pair set a new record for the most Latin Grammys won in a single night.

"Entren Los Que Quieran" also earned the prize for Best Urban Music Album, while its producer, Rafael Arcaute, picked up the statuette for Producer of the Year.

Calle 13's single "Latinoamerica" won the gongs for Song of the Year and Record of the Year, and "Baile de los Pobres" the trophy for Best Urban Song. The duo's "Calma Pueblo" won for Best Alternative Song and Best Music Video, and "Vamo a Portarnos Mal" was declared Best Tropical Song. 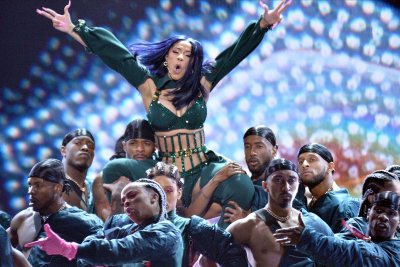