Swift named Entertainer of the Year at CMAs

Male Vocalist of the Year Blake Shelton poses for photographers back stage at the 45th Annual Country Music Association Awards at the Bridgestone Arena in Nashville, Tennessee on November 9, 2011. UPI/Terry Wyatt | License Photo

"One of my favorite things about this year is all the camaraderie between all these artists that I could call and say, 'Hey, do you want to come sing with me?'" Swift said upon receiving her award. "And there were more artists who showed up just out of the goodness of their heart and came out and performed for the fans at my shows."

Swift then read the names of people who had performed with her, written on her hand.

"You have made my year! Thank you so much!" she said.

The Band Perry took home the awards for New Artist of the Year and Single of the Year for "If I Die Young."

"We promise to keep working hard every day out on the road and here in Nashville to earn this award," the group's lead singer Kimberly Perry said.

After she earned the Song of the Year honor for penning the song, she said: "I truly believe that 'If I Die Young' would have been written with or without me. It was a song that was meant to be. But I was so excited to have pen and paper in hand when it was ready to come to earth."

Jason Aldean's "My Kinda Party" won the prize for Album of the Year, while Sugarland was named Vocal Duo of the Year and Lady Antebellum was presented with the Vocal Group of the Year gong.

Country music stars Brad Paisley and Carrie Underwood served as co-hosts of the event at the Bridgestone Arena.

Music // 2 days ago
Super Junior's Eunhyuk films 'Be' music video in behind-the-scenes look
Oct. 22 (UPI) -- K-pop star Eunhyuk shared footage from the set of his music video for the solo single "Be." 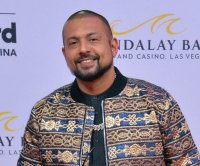