The record label said the new CD is to go on sale March 1.

"The result of a month-long recording session in the mountains of New Mexico, John Popper's Duskray project is much less a solo endeavor as opposed to a fully realized band featuring guitarist/producer Jono Manson, bassist Steve Lindsay, drummer Mark Clark and guitarists Kevin Trainor and Aaron Beavers," 429 Records noted in a release Wednesday.

"Described by Popper as a liberating, scrappy, roots-rock alter-ego of Blues Traveler, Duskray Troubadours is his new 'part-time' band allowing him to stretch out and explore his more melodic side."

"What I love about this album is that I'm playing differently and not because I tried to, either. The music led me there, which is the best way to do it, really. On this album, melody is what drove everything," Popper said in a statement.

Music // 9 hours ago
Seventeen play outlaws in 'Hot' music video teaser
May 23 (UPI) -- K-pop group Seventeen released a preview of its video for "Hot," the title track from its album "Face the Sun."

Music // 12 hours ago
Ozuna announces 2022 world tour
May 23 (UPI) -- Ozuna has announced a 38-stop world tour that will feature performances in Europe and North America. 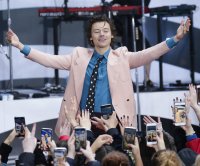