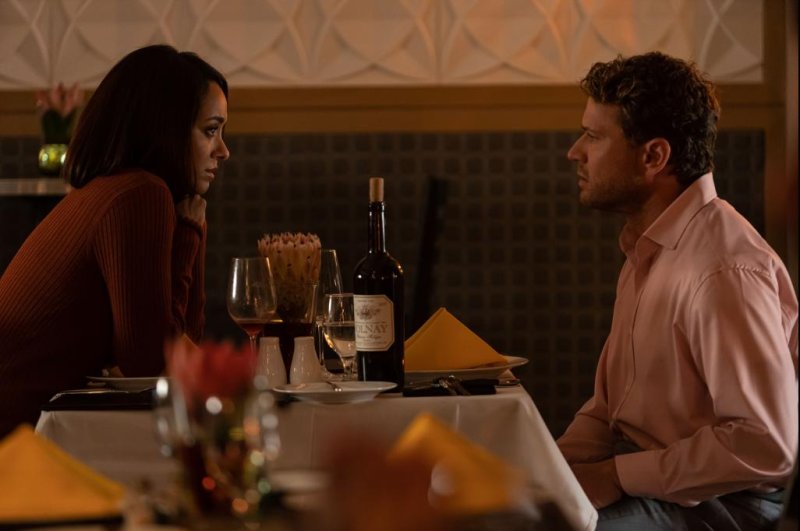 Kat Graham and Ryan Phillippe can be seen in the film thriller "Collide." Photo courtesy of Vertical

NEW YORK, Aug. 11 (UPI) -- Singer and The Vampire Diaries actress Kat Graham says she wanted to star in Collide because it is a taut and entertaining thriller that also explores issues close to her heart.

In theaters now and set for release on video-on-demand platforms Friday, the movie was directed by Mukunda Michael Dewil and follows three couples in real time over the course of one eventful evening at an upscale Los Angeles restaurant.

"How would I describe her? Damaged and seeking vengeance," Graham told UPI in a recent Zoom interview.

"I don't want to give too much away," she said. "You learn about the character and what brought her here, and it's not just a coincidence or random date."

Viewers of the film will learn quickly that Tamira was born and raised -- poor and oppressed because she is Black -- in South Africa during the apartheid era.

She orchestrates the blind date with Hunter because she holds him and his wealthy White family directly responsible for the trauma and tragedy experienced by her community, particularly the women and children, and wants to confront him, hoping for some closure.

Graham was eager to play the character because she hasn't seen many women from that time and place at the center of Hollywood storylines.

"I wanted to play a character who was fighting for her truth, who was dealing with her own demons and fighting them, while at the same time is somebody who has been the result of Apartheid racism," said the actress, who was born in Switzerland to a White, Jewish mother and Liberian father.

"I've seen it from both sides and both of my parents' parents' were refugees," she added. "I've seen what discrimination and hatred can do and look like and become to a community people, so I wanted to address that."

Primarily focused on writing and recording her own music these days, Graham has been working with MSNBC on a documentary about refugees.

She said she usually only agrees to acting projects if they are unique stories with substance and depth.

"I do have fun and I have my rom-coms and I have a great time and I do my animation stuff, but it is especially exciting to do a cool independent film," she said. "Most actors' dreams are to expand themselves artistically and see what they are capable of."

Dialogue-heavy and grounded in one setting, Tamira and Hunter's intense, emotional scenes play like a two-hander drama that could occupy a Broadway stage.

"It felt like we were shooting a play," Graham said. "Maybe it will be turned into a play because it definitely has the structure for it."

Staying in a seat for most of a film isn't as big of a challenge as you might expect, she added.

"I always say that as an actor, everything should live within the eyes. It helped me in a lot of ways stay super-connected to Ryan and his character," she explained.

"It also created that sense of urgency where you want the character to run and escape and do all of these things, but you are just stuck there. It actually created more of a commitment to the intensity of it."

She and Phillippe didn't have time to discuss their performances beforehand, but felt safe while pushing each other to be their best through difficult and powerful scenes.

"Ryan's a beast as an actor. He is incredible," she said.

"We both went for it. We had to just assume that we could trust the other person and catch the other person if they decided to do something or change something. It's so great to work with a seasoned actor. We could follow each other through different beats and moments."

Since restaurants are literal pressure-cookers, with staff rushing to prepare and deliver exquisite dishes for demanding customers, this is a clever location for Collide -- a movie about various people with much to lose.

In addition to Tamira and Hunter, there is a man who tracked his wife to the restaurant, where she is cheating on him with the manager, while another couple, who work at the eatery, amateurishly try to sell a bag of cocaine they found so they can get out of town and start new lives.

"There was a lot going on behind the scenes," Graham said of the other storylines.

"I loved this idea. I thought it was brilliant -- the way it was shot and all of the different elements and characters who ended up becoming connected in the end."

Movies // 13 hours ago
'My Father's Dragon' trailer brings children's book to life
Sept. 28 (UPI) -- "My Father's Dragon," an animated film from "The Secret of Kells" studio Cartoon Saloon and featuring Jacob Tremblay and Gaten Matarazzo, is coming to Netflix.

Norman Reedus honored with star on Hollywood Walk of Fame