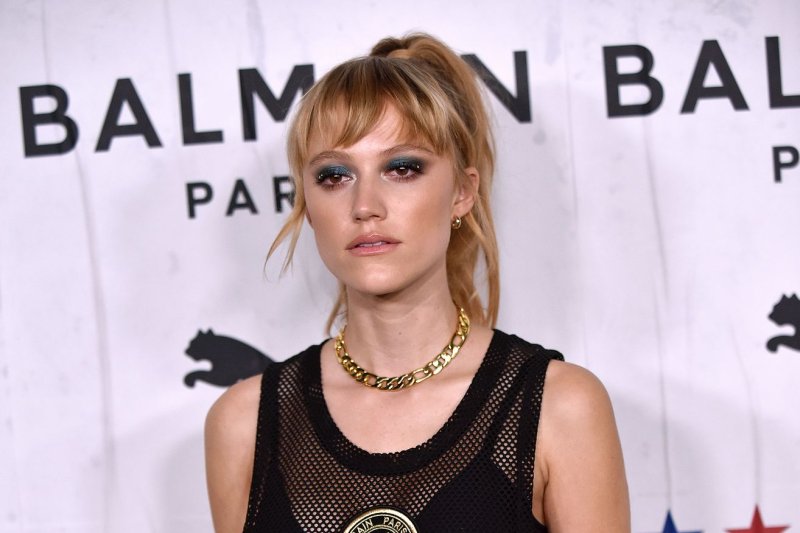 Monroe, 28, plays Julia, a woman who moves to Romania with her husband, Francis (Karl Glusman), and believes a man (Burn Gorman) across the street is watching her.

"I immediately connected with Julia and what she was going through," Monroe told UPI in a Zoom interview. "I think a lot of people watching this will relate."

Julia sees the man watching from his window. When she encounters him in public, Julia begins to suspect he is following her.

Unfortunately, Francis isn't entirely supportive. He tries to explain away their meetings as coincidence, and at one point calls her hysterical.

Monroe said having a loved one not believe her is the most relatable experience. Monroe said she feels isolated when people she confides in don't believe her.

"What I connected with the most was when a person doesn't believe you or tells you that you're overreacting or being dramatic," Monroe said.

Having appeared in movies and television since 2009, Monroe said she is used to fans recognizing her. However, she still has moments where she is alone and unsure of the intentions of people around her.

"I've been walking down the street and I've put my car key between my knuckles because I'm scared there's a person behind me," Monroe said. "It's just part of being a female that's unfortunate."

Monroe's mother first taught her to be guarded in public. Monroe said she remembered the lesson her mother imparted when they traveled to Europe and South America when Monroe was a child.

"She just said, 'As a female, we are traveling alone. We don't have a male here. We have to be extra careful,'" Monroe said. "I just always remember that. That was just ingrained in my head as a young kid."

Monroe's breakthrough film, the horror film It Follows, was also about a form of pursuit. Monroe said both Watcher and It Follows reflect characters struggling to convince people their pursuers are real.

"It's such a relatable, simple idea," Monroe said. "But it's such a beautiful way to tell this story through genre film."

In It Follows, teenagers were pursued by phantoms slowly approaching them. They could delay the pursuit by sleeping with someone and passing the spirits onto them.

The followers never went away. The teens could only put distance between themselves and the followers by passing the curse onto others via sex.

Monroe was in her early 20s when she made It Follows. Monroe said eight years and more long-term relationships later, she could relate to different aspects of Watcher.

"At the end of the day, I am a woman and he is a man and there are just certain things that he will never understand," Monroe said. "I hadn't really had that experience while filming It Follows."

It Follows was also mentioned in the recent Scream sequel as an example of "elevated horror" of which the killer is not a fan. Monroe said she has not seen Scream but her friend notified her that her film was pivotal enough to be in the self-referential series.

"That's pretty cool, I have to say," Monroe said.

Horror was a part of Monroe's life before she starred in horror movies. Monroe said she and her middle school friends would watch The Shining and John Carpenter films at sleepovers.

Monroe said those films allowed her to experience dangers she'd not yet lived through.

"It was feelings that I had never felt before, running for my life or being in these horrific situations," Monroe said.

Monroe said acting in films like Watcher and It Follows, as well as The Guest and Villains, allows her to have those experiences even more vividly. However, Monroe said, they're not easy.

"I think it's probably one of the hardest genres to film as an actor," Monroe said. "It's demanding physically and mentally beyond anything else that I've had to do."

While Watcher begins as a relatable stalker drama, the film also escalates like many of Monroe's previous efforts.

"Horror just feels like every day is a challenge because every day I'm going to be running for my life or crying or screaming," Monroe said. "It's taxing but it's also so rewarding."

Sundance movie review: 'When You Finish Saving the World' lives up to its title Sundance review: 'The Princess' delivers refreshing video essay on Diana

Movies // 12 hours ago
Aubrey Plaza: 'Emily the Criminal' shows 'how broken the system is'
LOS ANGELES, Aug. 9 (UPI) -- Aubrey Plaza and Theo Rossi discuss their movie, "Emily the Criminal," starring Plaza as a woman who resorts to crime to make ends meet.

Movies // 4 days ago
Lady Gaga confirms she will co-star in 'Joker' sequel
Aug. 5 (UPI) -- Singer, songwriter and actress Lady Gaga has confirmed on social media that she will co-star with Oscar-winning actor Joaquin Phoenix in the upcoming "Joker" sequel.
Advertisement

Stars react to Olivia Newton-John's death: 'Your impact was incredible'