Spider-Man: No Way Home is coming to theaters on Dec. 17. The film appears to be a finale of sorts to Holland's first three movies as the wall crawler.

Marvel licenses Spider-Man to Sony, a deal that was made before the creation of the Marvel Cinematic Universe, which Holland has taken part in.

"This is not the last movie that we are going to make with Marvel -- [this is not] the last Spider-Man movie. We are getting ready to make the next Spider-Man movie with Tom Holland and Marvel," Pascal, a producer on the film said to Fandango in an interview published on Monday.

"It just isn't part of...we're thinking of this as three films, and now we're going to go onto the next three. This is not the last of our MCU movies," she continued.

Websites such as Fandango, Atom Tickets and sites for theater chains AMC, Cinemark and Regal, saw a surge of demand for tickets. Some fan were place into hour-long online queues.

Tom Holland will take on multiple villains from past Spider-Man films in Spider-Man: No Way Home. Jon Watts returns as director.

'Spider-Man: No Way Home': Villains from other universes arrive in new trailer 'Shang-Chi' star Simu Liu recalls career struggles in 'SNL' monologue What to watch next: Sign up for UPI's Streaming newsletter

Movies // 1 hour ago
Sundance movie review: 'You Won't Be Alone' will make you wish you were
LOS ANGELES, Jan. 24 (UPI) -- "You Won't Be Alone" is a Macedonian arthouse horror movie, so it was bound to be divisive anyway. If it doesn't work for you, boy is it a chore.

Movies // 2 hours ago
Sundance movie review: 'Cha Cha Real Smooth' is the best of the fest so far
LOS ANGELES, Jan. 24 (UPI) -- Writer/director/star Cooper Raiff's "Cha Cha Real Smooth" harkens back to the indie comedies that thrived at Sundance in the '90s, and establishes Raiff as a major talent.

Movies // 18 hours ago
Karen Gillan: Sundance clone movie 'Dual' was 'like being on Avengers'
LOS ANGELES Jan. 23 (UPI) -- Karen Gillan, co-stars Aaron Paul and Beulah Koale and writer/director Riley Stearns discuss their Sundance movie "Dual." Gillan plays a woman and her clone in a process she compared favorably to her Marvel movies. 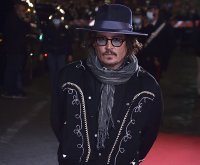