Alice Cooper performs with Rob Zombie on the night when he is inducted into the Rock and Roll Hall of Fame at the Induction Ceremonies at the Waldorf Astoria in New York City in 2011. File Photo by John Angelillo/UPI | License Photo

July 22 (UPI) -- Director Rob Zombie posted on social media photos of what the star of his new version of The Munsters will look like.

"The clay is out and the sculpting has begun on a very prominent brow for THE MUNSTERS. #robzombie #themunsters #hermanmunster," Zombie captioned the images of a model of his monster Herman's enormous scarred forehead.

The Universal movie is inspired by The Munsters TV sitcom, which aired 1964-66.

No casting has been announced yet for the project, which will be filmed in Budapest.

Earlier this week, Zombie shared images of the location where the set will be built and blueprints for the mansion and neighborhood where his creepy characters will live.

"We aren't just building the Munsters house. We are building all of Mockingbird Heights! It's a big job, but somebody's got to do it," he posted.

Zombie is a heavy metal singer and founder of the band White Zombie. His film credits include House of 1,000 Corpses, The Devil's Rejects, a Halloween remake and its sequel, The Lords of Salem and 31. 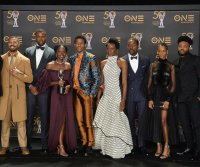