Immortal takes place in 1945 and follows an ex-soldier who discovers gold in the wilderness of Lapland, Finland, played by Jorma Tommila.

The ex-solider tries to bring the gold into the city where he encounters a squadron of Nazi soldiers, lead by Anderson. A battle then ensues for the treasure.

The film will begin production in Lapland in September. Sony Pictures Worldwide Acquisitions has world distribution rights outside Nordic, with Nordisk Film has taken rights.

"To make an action film in Finland has been a dream of mine since I was 10-years-old. Finally I am in a situation where I can fulfill my dream and make an epic, action-packed survival story which takes place in World War II," Helander said in a statement.

Anderson stars as Arthur Shelby in Peaky Blinders. The crime drama will end with its upcoming sixth season.

Movies // 23 hours ago
James Bond is back in new 'No Time to Die' trailer
July 26 (UPI) -- "No Time to Die," a new James Bond film starring Daniel Craig, Rami Malek and Léa Seydoux, will open in theaters in October. 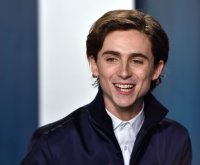 Movies // 5 days ago
Rob Zombie offers first look at his version of Herman Munster
July 22 (UPI) -- Director Rob Zombie posted on social media photos of what the star of his new version of "The Munsters" will look like.