"Greenland" star Gerard Butler is returning for a sequel to the film, along with Morena Baccarin. File Photo by Jim Ruymen/UPI | License Photo

Morena Baccarin arrives on the red carpet at the screening of "Framing John DeLorean" in April 2019. File Photo by John Angelillo/UPI | License Photo

Gerard Butler attends the premiere of "How to Train Your Dragon: The Hidden World" in February 2019. File Photo by Jim Ruymen/UPI | License Photo

June 14 (UPI) -- Gerard Butler and Morena Baccarin are set to star in a sequel to 2020 thriller Greenland titled Greenland: Migration.

Butler and Baccarin are returning as John and Allison Garrity, as the Garrity family must leave the Greenland bunker and find a new home across Europe's frozen wasteland.

Director Ric Roman Waugh is also returning to helm the sequel from a script by Greenland writer Chris Sparling.

Greenland was released in August and earned over $52 million worldwide during the COVID-19 pandemic while many theaters were closed.

Paul Anderson of 'Peaky Blinders' to star in WWII film 'Immortal' Zach Galifianakis is a malfunctioning robot in 'Ron's Gone Wrong' What to watch next: Sign up for UPI's Streaming newsletter 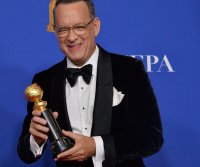