Angela Bassett arrives on the red carpet for a screening of "The Apollo" in April 2019. File Photo by John Angelillo/UPI | License Photo

Gillan portrays a highly-skilled assassin who works for a secret organization led by Paul Giamatti in the clip released on Tuesday.

The actress is assigned a special mission where she finds out that the enemy has kidnapped a young girl (Chloe Coleman).

Gillan puts it all on the line to protect the young girl and is reunited with her estranged mother who is also an assassin, played by Lena Headey. Gillan also receives help from fellow assassins portrayed by Angela Bassett, Michelle Yeoh and Carla Gugino.

The group gives Gillan weapons hidden inside of books and take part in a violent confrontation inside of a diner.

Gunpowder Milkshake, from director Navot Papushado (Big Bad Wolves) is coming to Netflix in the U.S. on July 14. STX will release the film in Canada, South America and China, with Studiocanal releasing it in the U.K., France, Germany, Australia and New Zealand.

Pedro Pascal, Karen Gillan to star in Netflix film 'The Bubble' 'Eternals' assemble in first teaser with Richard Madden, Angelina Jolie What to watch next: Sign up for UPI's Streaming newsletter 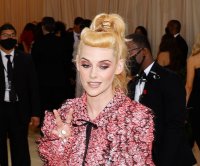