The studio shared a trailer for the action thriller Monday featuring Jason Statham as Harry, aka H, a cash truck security guard with a secret.

The preview shows H (Statham) surprise his team by unleashing deadly skills during a heist. It is later shown that H is seeking revenge for the death of his son, a civilian who was killed in a past heist.

"And I do bear a grudge," H says in the trailer.

MGM released a poster for Wrath of Man last week that shows H with a bloody face and hands.

Wrath of Man is based on the 2004 film Le Convoyeur, written and directed by Nicolas Boukhrief. The new movie is written by Guy Ritchie, Ivan Atkinson and Marn Davies, with Ritchie also serving as director.

The film will mark Statham and Ritchie's fourth collaboration together, following Lock, Stock and Two Smoking Barrels, Snatch and Revolver.

Wrath of Man opens in theaters May 7.

'Wrath of Man': Jason Statham appears in poster for Guy Ritchie film 'The Night House' trailer shows Rebecca Hall uncover secrets 'Sky Rojo' Season 2 to premiere on Netflix in July What to watch next: Sign up for UPI's Streaming newsletter

Movies // 3 days ago
Rob Zombie offers first look at his version of Herman Munster
July 22 (UPI) -- Director Rob Zombie posted on social media photos of what the star of his new version of "The Munsters" will look like. 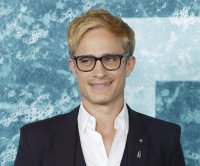